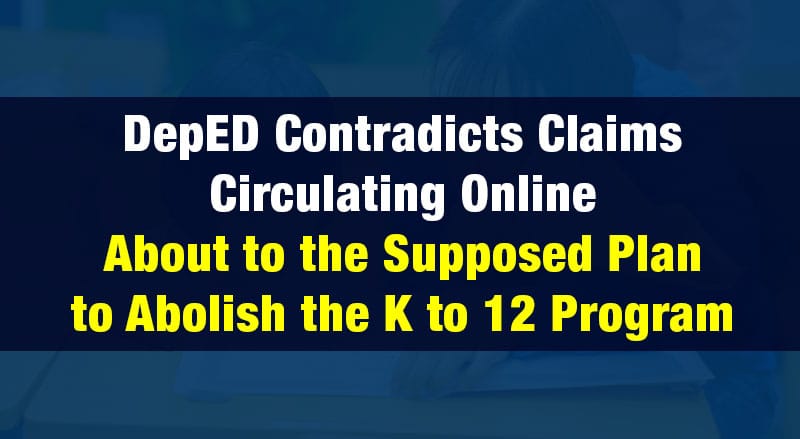 It all started when a news on CHED’s plan to “review and change” the system for its K to 12 Transition Program was misinterpreted by many as a move to put an end to the whole K to 12 Program. People were quick to express their emotions upon seeing headlines that are being shared abruptly on social media and disregarded the whole context of the news which actually discusses CHED’s plan for the K to 12 Transition Program and NOT THE WHOLE K to 12 Program.

Because of the immediate widespread of the said “fake news”, the Department of Education released an official statement on Monday, May 20, 2019, addressing the alleged plan to repeal K to 12 Program. Please read it below.

PASIG CITY, May 20, 2018 – Sentiments and questions on social media pertaining to the supposed plan to scrap the K to 12 Basic Education Program are clearly based on misinformation and lack of critical discernment.

The claims circulating online came after news of the Commission on Higher Education’s (CHEd) plan to “review and change” the system for its K to 12 Transition Program was misconstrued to mean the implementation of the entire K to 12 Program. These two are not one and the same.

The implementation of the K to 12 Program has seen numerous gains for the basic education system, which include the initial results of the Senior High School (SHS) Program surpassing expectations in enrollment and transition rates and in providing free or highly subsidized SHS education to more than 2.7 million learners in public and private schools two years after the SHS Program implementation.

It is also important to remind the public that the Department of Education’s (DepEd) implementation of the K to 12 Program is mandated by law, under Republic Act No. 10533, otherwise known as the “Enhanced Basic Education Act of 2013.” Therefore, DepEd, as an executive arm of the government, cannot arbitrarily discontinue the Program. As with any law, the implementation, amendment, expansion, or repeal of the K to 12 Program is within the ambit of the legislative branch of the government comprised of the Senate of the Philippines and the House of Representatives.

Nevertheless, the Department maintains its stand that the K to 12 Program is a prompt necessity that pushing it back might prove detrimental to the accelerating and increasing demands on education. The challenges still abound but the support of the national and local government, and of stakeholders in the private sector and the community, has been overwhelming that it silences doubts and strengthens the resolve to move forward with change today.

Lastly, DepEd calls on the public to make a habit of consulting the official website and social media accounts of the Department before spreading assertions and engaging discussions on its policies, programs, and projects that may influence the opinion, decision, or action of our primary stakeholders ─ our learners.

We at Buhay Teacher are against the spreading of wrong information that may cause confusion to people. With this, we encourage everyone of you to please be make it a habit of visiting DepED’s official online channels such as the following:

Aside from constantly striving to survive the seven-to-five routine as a teacher, Hannah also likes to write, browse the internet, watch movies, or get in her feet with her backpack and travel the world.
Previous Teachers Can Now Use Brigada Eskwela Certificate in Renewing PRC License
Next Radio Quickly Apologizes After Segment Host Mistakenly Announced June 13, 2019 as Opening of Classes

Laptops, Tablets to be Provided for Pasig’s Teachers and Learners

With this school year most likely going to be entirely on ‘blended learning’, the Department …

This website uses cookies to improve your experience while you navigate through the website. Out of these cookies, the cookies that are categorized as necessary are stored on your browser as they are essential for the working of basic functionalities of the website. We also use third-party cookies that help us analyze and understand how you use this website. These cookies will be stored in your browser only with your consent. You also have the option to opt-out of these cookies. But opting out of some of these cookies may have an effect on your browsing experience.
Necessary Always Enabled
Necessary cookies are absolutely essential for the website to function properly. This category only includes cookies that ensures basic functionalities and security features of the website. These cookies do not store any personal information.
Non-necessary
Any cookies that may not be particularly necessary for the website to function and is used specifically to collect user personal data via analytics, ads, other embedded contents are termed as non-necessary cookies. It is mandatory to procure user consent prior to running these cookies on your website.
SAVE & ACCEPT